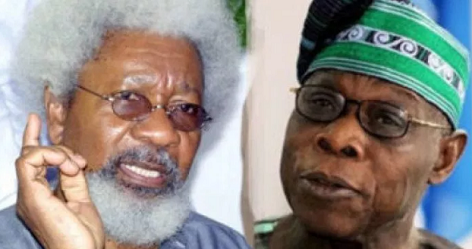 Nigeria’s Nobel Laureate, Wole Soyinka, on Tuesday alleged that the Olusegun Obasanjo administration ‘protected’ those who murdered Nigeria’s former Attorney General of the Federation and Minister for Justice, Bola Ige.

Mr Soyinka, playwright and social critic, made this known in a statement on Tuesday titled “Trivialise Corruption, Neutralise Justice”, issued in his capacity as convener of Citizen Forum.

The statement comes against the background of the crisis rocking the judiciary following the controversial suspension of the Chief Justice of Nigeria, Walter Onnoghen, over his failure to declare his assets.


Mr Soyinka, who said impunity reigns where there is no justice, explained that the present crisis in the judiciary shows that the nation and its leaders did not learn from the murder of the late Mr Ige and “the manner investigations into his death were handled”.

He was murdered in December 2002 in his home in Ibadan, the Oyo State Capital.

Mr Soyinka Mr Obasanjo’s government knew the killers of the late minister and politician and indeed allegedly protected and rewarded them.

“The government at the time of Ige’s killers know the truth. That government protected – I repeat – protected, and rewarded his killers. Those who wish to dispute this had better first immerse themselves in the circumstances of that murder, and the unconstitutional, indeed illegal trajectory of the principal accused, one that not only facilitated his unconstitutional participation in the ensuing election but catapulted him straight to the occupancy of the seat that had been kept warm for him during his trial and absence,” Mr Soyinka said.

“On release, he was ushered straight into the slot of Chairman of the Appropriation Committee of the House of Representatives. That was not all. The head of that government, General Olusegun Obasanjo, proceeded to burnish Ige’s memory with characteristic zeal.”
at February 07, 2019