Steve Harvey & Mo'nique Get Into HEATED Conversation On His Show 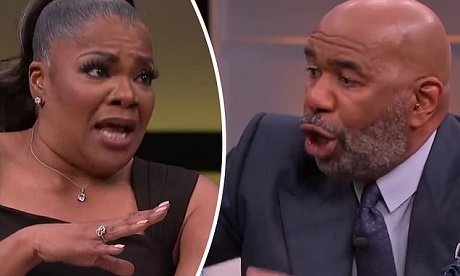 Nearly 10 years after winning an Oscar for Best Supporting Actress for Precious, Mo'Nique has only worked sparingly, claiming on multiple occasions that she has been 'blackballed.'

The actress made an appearance on The Steve Harvey Show on Wednesday, where the conversation between her and Harvey got quite heated, to the point where Mo'Nique (real name Monique Imes), 51, even mentioned punching him in the mouth.

While cooler heads ultimately prevailed, the discussion was quite volatile, with Mo'Nique claiming that Oprah Winfrey, Tyler Perry and Lee Daniels helped 'blackball' her from the industry.


After winning the Oscar in 2009, Mo'Nique has only starred in three movies, 2014's Blackbird, and a pair of 2016 movies, Interwoven and Almost Christmas.

The actress revealed in a 2015 interview with The Hollywood Reporter that Daniels, who directed the actress to her Oscar win in Precious, told her she was being blackballed.

She also revealed in that interview she was offered the role Oprah Winfrey ultimately got in Daniels' The Butler, and to play Taraji P. Henson's Cookie character on Empire, though Daniels has denied it.

Then in 2017, during a stand-up routine that went viral, she said Daniels, Winfrey and Tyler Perry were not, 'treating me fairly,' adding that they could, 'suck my d**k if I had one.'

Mo'Nique said she would never, 'waiver from my comedy show on that stage,' adding when they allow people to take their gift and, 'turning into what makes them comfortable, we then lose.'

She also called out Harvey and others for, 'not being strong enough to go public and say we cannot throw our sister under the bus.'

Despite everyone telling her privately she's done nothing wrong, Harvey added, 'When you tell the truth, you have to deal with the repercussions of the truth.'