Students Paid Up To £3,500 To Catch Potentially Deadly Diseases 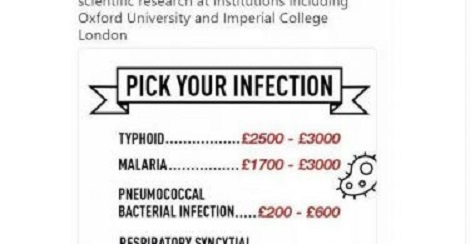 Cash strapped university students are being paid as much as £3,500 to be infected with dangerous tropical diseases including typhoid, malaria and pneumonia.

The UK students are among a growing number of healthy volunteers being paid to be infected with exotic bacteria and viruses for scientific research at institutions including Oxford University and Imperial College London.

The UK is a world leader in the study of infectious diseases and the experiments - known as “challenge trials” where human guinea pigs, mainly students, are “challenged” with an infectious disease - have become a popular way to progress the development of new vaccines at a fraction of the cost of field studies.


With the risk of a global pandemic growing, experts say a better understanding of  infectious illnesses and how to combat them is urgently needed.

Matthew Speight, a 27-year-old zoology student at Oxford University, earned almost £6,000 in two typhoid challenge trials organised by the Oxford Vaccine Group in 2016 and 2017. Undeterred, this week he is taking part in another trial in which he could contract malaria.

“I am a PhD student, the income I get is significantly below the minimum wage, so the financial incentive is strong,” he told The Telegraph. “The trials pay quite well and Oxford is very expensive. I used the money for my rent.”

“You swallow a cup of bacteria”, said Mr Speight. “[There was] a bit of trepidation, but also a resolve. I thought, I’m here, so bring it on.”

Despite having had a trial vaccine two weeks ahead of time, the student contracted the disease. “Three or four days later I had this crazy fever. It was the height of summer, during the 2016 heatwave. My body and joints ached, I had a strong headache, and I was profusely sweating - I remember the bed being soaked, I had a lot of laundry to do that week. I wouldn’t wish that on my worst enemy.”