The Many Messy Allegatons Against TOPSHOP Boss, Sir Philip Green 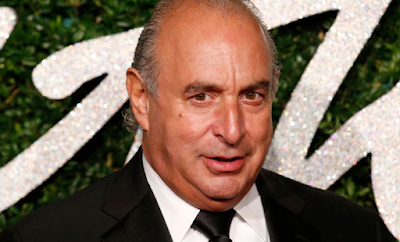 The claims of s-x abuse and racism Sir Philip Green tried to hush up have been finally revealed after he dropped a legal fight against the newspaper that published them.

It was alleged the tycoon groped a senior executive and branded her a “naughty girl” before paying her more than £1million to stay silent about it, told a black employee he was still “throwing spears in the jungle” and called a Chinese visitor “Mr Ching Chong Charlie”.

The allegations pile further pressure on the former BHS boss, who has faced calls to be stripped of his knighthood.

And they come just hours after Green had insisted to the Mirror he had never done anything wrong during his career.

Among a series of lurid claims published in the Telegraph, he allegedly kissed the senior executive’s face, in front of other employees, and it is said he made comments about her weight, leaving her and others “uncomfortable”.

She apparently eventually complained to her HR department, but the process led to claims of a “cover-up”.

One source told the newspaper about an alleged incident where Green, facing a £3million legal bill after dropping his claim, “grabbed her bum”.

The black worker allegedly abused racially is said to have complained and he was eventually paid close to £1million after signing a gagging order. The ­Telegraph claims a Chinese businessman was asked by Green: “What do you think Mr Ching Chong Charlie?”

And another staff member was allegedly called “bhaji” and “curry” because of her Indian heritage.

Green’s lawyers told the newspaper he was a “passionate businessman, who can at times be overexuberant and hotheaded”. It was claimed he can be “perceived at times as aggressive with senior and trusted staff”.

They added: “It is further denied that any of Sir Philip’s conduct towards employees amounted to crime, or anything that would amount to gross misconduct, or a serious risk to health and safety.”

Hours before the claims were published, Green was still defending his reputation, despite a string of other claims.

He allegedly threatened to “bankrupt” the Telegraph editor if the allegations were printed, saying it would give him “pleasure” to do so and warned reporters he did not want an “ugly punch up”.

Green, who was boss of BHS until he sold it before the store collapsed with the loss of 11,000 jobs, also claims the paper had a “vendetta” against him.

The mogul, believed to be worth £2billion, said: “In 45 years I have never been involved in litigation, never had to deal with any complaint. I have travelled all over the world, dealing with every type of people, race, religion, whatever, and I have never had any issues with anyone.”

But his claims conflict with various tales about him over the years. A book last year quoted one occasion when he let rip at a company director, saying: “You’re f*****g useless. I should throw you out of the window but you’re so fat you’d probably bounce back up again.”

“Philip would often pick on one person and just batter them. Sometimes you would just sit there and think, ‘Thank God it’s not me.’”

Last year, a former Topshop boss not involved in the claims by the Telegraph became the first woman to publicly accuse Green of sexual harassment. Auna Irvine, who run his flagship shops in America, claims she suffered a year-long campaign of bullying.

She alleged the dad-of-two would repeatedly grab her by the waist and slap her bottom, make comments about her breasts and tell her she should lose weight.

Married Green was, until the BHS scandal, often snapped at glitzy events and catwalk show with his arms around beautiful women, from Beyonce to Kate Moss and model Cara Delevingne.

He dropped his case against the ­Telegraph after his lawyers said it was “pointless” because he had been named by Labour peer Lord Hain in Parliament last October as the “leading businessman” behind an injunction against the paper.