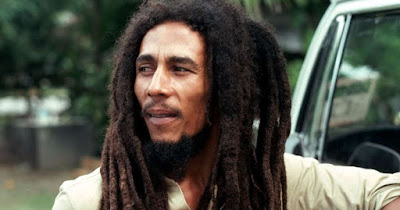 The Mayor of the City of Toronto, John Tory, has proclaimed every February 6 as Bob Marley Day.

Bob Marley was a Jamaican singer and songwriter who created a mix of reggae, rocksteady and ska in his musical compositions.

He died on May 11, 1981 at the age of 36 from skin cancer. The Mayor made a tweet which was accompanied by a photo of the proclamation through his official Twitter handle.

He wrote, “Proud to proclaim today Bob Marley Day in the City of Toronto. This Toronto tradition pays tribute to Bob Marley’s legacy of peace, harmony and the unity of humankind.


”His music lives on today and is a guide towards a world united – one love. #BobMarley #BobMarleyDay.“

The official proclamation reads, “WHEREAS each year on February 6, we honor the legacy of Robert (Bob) Nesta Marley. He began his career with the wailers and song became known for his distinctive songwriting and vocal style.

“Marley sang of tolerance and love. He became one of the greatest ambassadors of peace the world has seen. He encouraged us to live in harmony, chronicle our own destiny and stand up to what is right.

“Today, his music lives in and appeals to people of all cultures and guides them towards a world united – One People – One Love.

“Now therefore, I, Mayor John Tory, on behalf of Toronto city council, do hereby proclaim February 6, 2019 as “Bob Marley Day“ in the city of Toronto.“

He also tweeted that “The Toronto Sign will be lit in green, black and yellow today to celebrate Bob Marley Day in the City of Toronto. #BobMarley #BobMarleyDay.“ 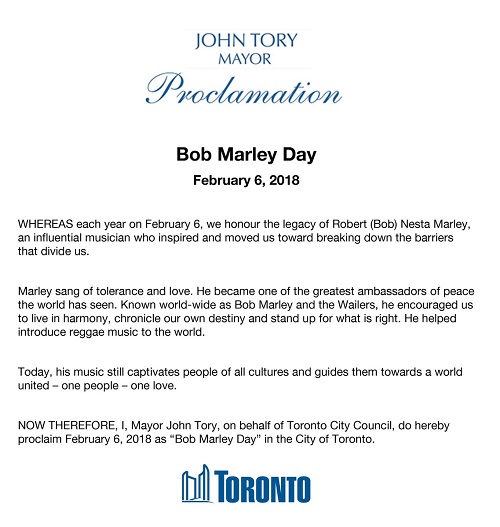