Trump In Vietnam For Summit With Kim Jong-Un 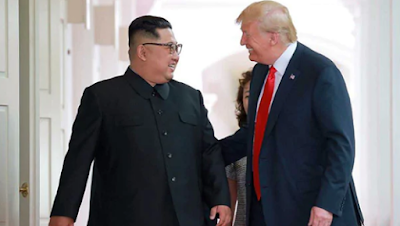 US President Donald Trump has arrived in Vietnam ahead of his second summit with North Korean leader, Kim Jong-un.

The summit, which is due to take place today and tomorrow, follows a historic first round of talks in Singapore last year.

The two leaders are expected to discuss progress towards ridding the Korean peninsula of nuclear weapons.


The Hanoi meeting is expected to build on the groundwork of what was achieved at the Singapore summit last June.

That meeting produced a vaguely worded agreement, with both leaders agreeing to work towards denuclearisation - though it was never made clear what this would entail.

This time round, both leaders will be very conscious that expectations will be high for an outcome that demonstrates tangible signs of progress.

However, Mr Trump appeared to be managing expectations ahead of the summit, saying he was in "no rush" to press for North Korea's denuclearisation.

"I don't want to rush anybody. I just don't want testing. As long as there's no testing, we're happy," he said.

Washington had previously said that North Korea had to unilaterally give up its nuclear weapons before there could be any sanctions relief.
at February 27, 2019