A Nigerian man just got one of his tweets replied by President Trump! And ofcus he could make a frame out of it for his children to see a US President once responded to his tweet! Yea… it’s a big deal!

So a Nigerian who goes by the name Akin Sawyerr on twitter posted a video of a lady in a wrapper perfectly juggling a ball. The video has now been seen over 8 million times despite it wa sposted only 3 days ago. It has thousands of likes and ofcus thousands of retweets too.

The US first man, also saw it and Trump couldn’t help but COMMENT. Amazing, the first American wrote. 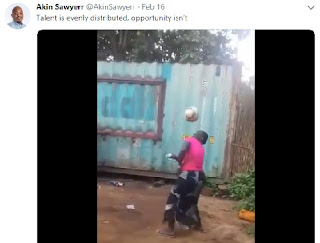