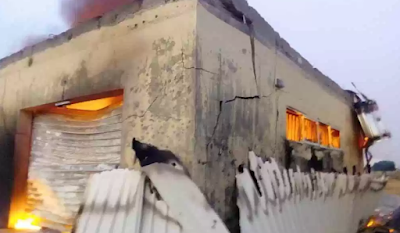 Now INEC has released a statement saying reports have been made to Acting IGP, and nothing will stop the forthcoming elections. Read the full statement below.

The Commission has notified the Acting Inspector General of Police of the emerging trend of the burning of the Local Government Offices of the Commission close to the conduct of the elections and at a period when the Commission is engaged in the massive movement of election related materials nationwide.

In view of these developments, the Commission has taken the following steps:

1. Notified the Inspector General of Police of this new trend and requested that additional security measures be provided to enhance security around INEC Offices and other critical structures of the Commission.

2. Directed the Resident Electoral Commissioner for Plateau State to open a register for all those in the affected Local Government Area who approach the Commission to collect their PVCs within the specified period. The Commission will print the PVCs and make them available for collection in good time before the elections.

3. Reprinted and delivered the Permanent Voters’ Cards of the affected registered voters in Isiala Ngwa South in Abia State.

4. Made temporary arrangements for the relocation of the burnt offices of the Commission. The said offices will be ready for the conduct of the February 16 and March 2, 2019 elections.

5. The Commission will proceed as planned in the affected Local Government Areas and all the burnt materials will be replaced in good time and as such will not affect the conduct of the elections.
All relevant security agencies have been requested to arrest and bring to justice, persons or groups involved in the attacks on the offices of the Commission.

The two fire incidents did not affect the Smart Card Readers that are presently being configured in the respective state offices of the Commission.

The Commission wishes to assure all Nigerians that it will not succumb to the antics of arsonists whose motive might be to create fear in the minds of voters and sabotage the conduct of the 2019 general elections.
at February 11, 2019