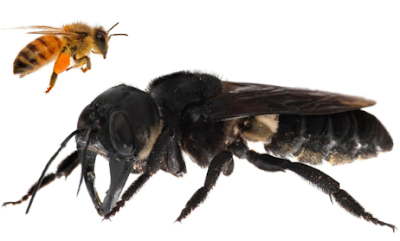 The world’s biggest honey bee, a giant insect generally the measure of a human thumb has been rediscovered in a remote locale of Indonesia in its first sighting in about 40 years.

Until recently, the last time Adam C. Messer had reported seeing Wallace’s giant bee living in the wild was in 1981. The bee is among the 25 “most wanted lost” species that are the focus of Global Wildlife Conservation’s “Search for Lost Species” initiative.

Clay Bolt, a specialist bee photographer who snapped the enormous insect said, “To actually see how beautiful and big the species is in life, to hear the sound of its giant wings… was just incredible.”


“My dream is now to elevate this bee to a symbol of conservation in this part of Indonesia, a point of pride for the locals there.”

The bee (full name Megachile pluto), which lives in the Indonesian island region of North Moluccas, makes its nest in termite mounds, using its large fang-like mandibles to collect sticky resin to protect its home from the termites.