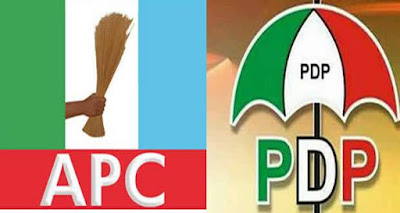 The All Progressives Congress, APC, yesterday, launched a blistering attack on the Peoples Democratic Party, PDP, and its  presidential candidate, Alhaji Atiku Abubakar, describing their claim of having won last month’s presidential poll as the hallucinatory outcome of a post-election depression.

The APC’s claim was backed by the Muhammadu Buhari Presidential Campaign Organisation, which also charged the PDP of being steeped in post-election trauma.

The claims were, however, robustly rebuffed by the PDP which accused President Buhari of standing on a stolen mandate even as the party affirmed that it was the clear winner in the six states where run-off governorship elections are to be conducted this weekend.


The APC’s attack on the PDP followed revelations in the court affidavit attached to Atiku’s petition at the Presidential Election Tribunal where it was deposed that the PDP candidate won the election by 1.6 million votes.

The PDP had claimed that the figure could be verified by data in custody of the Independent National Electoral Commission, INEC. Responding to the claim yesterday, in a statement by its National Publicity Secretary, Mallam Lanre Issa-Onilu, the APC said: “Following the outcome of the Presidential election, during which a vast majority of Nigerians reaffirmed their unshaken belief in President Buhari to continue to steer the affairs of the country for another four years, we have watched in disbelief and utter amusement how the opposition PDP and its Presidential candidate, Atiku Abubakar, have engaged in series of circus shows to cheer up their crestfallen and disillusioned members.

The assertions of the APC were backed up by the Buhari Campaign which speaking through its spokesman, Mr. Festus Keyamo said: “It is contradictory to their earlier claim that they needed access to INEC server and data base but given that the court refused their plea the big question is that where did they get this phantom figure from? “The PDP did not have a Plan B and their plan was to rig the election. They should learn to move on from this post-election trauma and prepare for 2023. Just as they never recovered “They should not be trapped in this trauma, because these figures can only be coming from a mind that is hallucinating.”