After Revealing She Slept With Geri, Mel B Takes A Step Further Branding Victoria Beckham A B***h 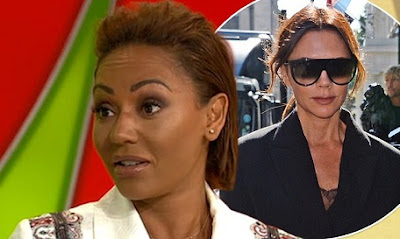 She created shock waves when she revealed her secret s-x romp with Geri Halliwell. And Mel B is set to cause more ripples within the Spice Girls after calling former band mate Victoria Beckham a 'b***h' in same interview with Piers Morgan.

The 43-year-old singer reportedly told the TV presenter that the tense relationship between her and Victoria is down to her turning down their offer to join the reunion tour, reports The Sun.
During the same interview on Piers Morgan's Life Stories where she dropped the bombshell that she had got intimate with her pal Geri, Mel also discussed Posh.

The website claimed that when Piers asked Mel directly about her opinion of Victoria she replied: 'Bit of a b***h'.


However she is also believed to have added: 'I am sad she is not going to be there [on tour]. But she is busy with what she is doing with her fashion line and her family.

'But I am gutted that she is not going to be with us. But I am still going to hold that candle and hope that she will.'

Insiders told the publication that Mel's comment will anger Victoria, who has reportedly made it clear she doesn't want to go on tour.
at March 29, 2019