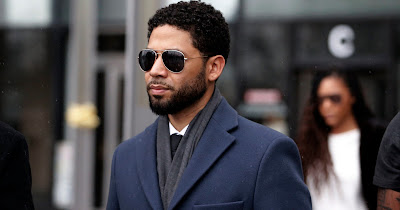 The charges against Jussie Smollett were suddenly dropped without explanation on Tuesday and a judge has sealed the case after the actor agreed to pay $10,000 in bond forfeiture.

The Empire actor appeared in Chicago on Tuesday for an emergency hearing after his lawyers announced the news in a statement. Smollett, 36, was facing up to 48 years behind bars on 16 felony counts of filing a false police report.

Today, the charges were dropped after he agreed to forfeit his $10,000 bond.

It remains unclear what prompted the decision but the Cook County's State's Attorney's office said it was due in part to Smollett's 'volunteer service in the community.'


'After reviewing all of the facts and circumstanced of the case, including Mr. Smollett's volunteer service in the community and agreement to forfeit his bond to the City of Chicago, we believe this outcome is a just disposition and appropriate resolution to this case,' a spokesman said.

The decision to drop the case comes after the Cook County's State's Attorney, Kim Foxx, recused herself over her contact with a member of Smollett's family in the hours after the attack.

Chicago Police chiefs, who were confident in their evidence against Smollett, are 'furious' about the decision, according to sources cited by local media.

In a statement today, Smollett's lawyers revealed the news.

'Today, all charges against Jussie Smollett were dropped and his record has been wiped clean of the filing of the complaint against him.

'Jussie was attacked by two people he was unable to identify on January 29th.

'He was a victim who was vilified and made to appear as a perpetrator as a result of false and inappropriate remarks made to the public causing an inappropriate rush to judgement.

'Jussie and many others were hurt by these unfair and unwarranted actions.

This entire situation is a reminder that there should never be an attempt to prove a case in the court of public opinion.

'That is wrong. It is a reminder that as a victim, in this case Jussie, deserves dignity and respect.

'Dismissal of charges against the victim in this case was the only just result.

'Jussie is relieved to have this situation behind him and is very much looking forward to getting back to focusing on his family, friends and career.'