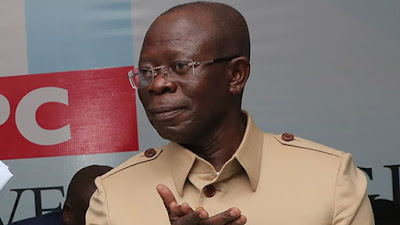 Women leaders of the All Progressives Congress (APC) in Imo State, led by Theresa Ohanuha, have cautioned Adams Oshiomhole, the APC National Chairman, not to enter the state forthwith.

This was disclosed in a communiqué issued after their protest on Saturday.

The women protested the suspension of Rochas Okorocha, Governor of Imo State, from the party by the APC National Working Committee (NWC) led by Oshiomhole.

According to the women, Oshiomhole's actions are some of the reasons Imo State experienced low turnout in the presidential election.


They also noted that the National Chairman does not have moral justification to remain the party chairman after failing to deliver President Muhammadu Buhari and APC in his council and state during the February 23 elections.

They also accused the former Edo State Governor of unnecessarily attacking Okorocha because of the jealousy that he single-handedly “built the party” in the South East.

Ohanuha, who led the protesters, said: “These actions of Oshiomhole negatively affected the outcome of the recent presidential election in Imo. The suspension of the Imo West senator-elect, Governor Rochas Okorocha, on the basis of anti-party activities is unacceptable.

“We are sure that Mr. President is not aware of these events. We, the APC women in Imo State, respectfully appeal to Mr. President to call Oshiomhole to order.”