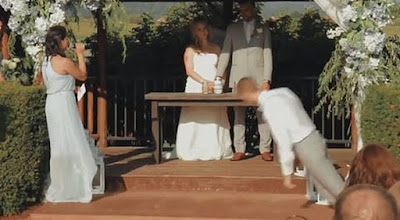 A best man had his teeth knocked out at a wedding when he fainted and crashed face first into the floor.

The unnamed man, who was seen standing close to the bride and groom at the outdoor wedding in Washington, USA on Friday, suddenly lost consciousnesss.

Video footage showeds the maid of honour serenading the newlyweds as the guests listened.

But the best man, seen on the right of the screen, started swaying before he lost consciousness and fell heavily to the floor.

He was seen hitting the floor hard unable to use his hands to break his fall.

Guests and the groom went running to his aid as the stunned bride and maid of honour looked on in shock.

The music stopped as people ran over with one calling for water and another asking for a towel.
The man is helped to his feet and is walked away from the ceremony while holding a cloth to his face.

According to Jukin Media, the man broke some of his teeth when his face hit the ground, but he did not suffer a concussion and was otherwise uninjured. 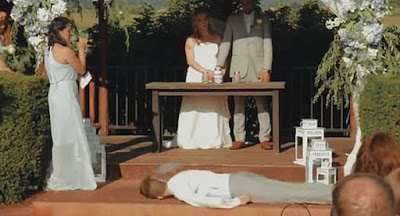