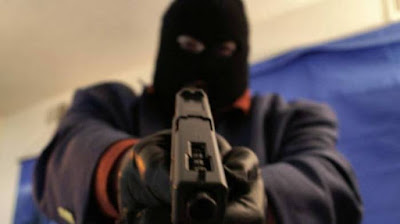 A pistol wielding robbery gang operating on a motorcycle has mowed down a businessman on the street of Lagos after forcefully taking away the sum of N1.5 million from him.

The killing took place at the FESTAC area of the state penultimate Tuesday at about 11am. Saturday Sun was reliably informed that,the victim identified as Mr. Jumbo Williams Irek, a clearing and forwarding agent in Apapa, was in company of his driver, in his car when the incident happened.

It was learnt that the victim had in company of his driver gone to a new generation bank in the area  to make the withdrawal and was returning to their base when they were suddenly blocked by the two gun totting Okada riders who demanded for the money the businessman had gone to withdraw. An argument was said to have ensued between the businessman and the robbers who reportedly released a volley of bullets into his body.


“There was a panic everywhere and people ran helter skelter following the loud boom of gun. There was blood all over as the businessman slumped while the robbers escaped almost immediately from the scence of the shooting incident”, an eyewitness revealed.

Meanwhile, the matter had been transferred to the State Criminal Investigations Department, Homicide Section, Yaba, Lagos for discreet investigation. At the SCID, the driver had been methodically questioned and the victim’s car impounded.