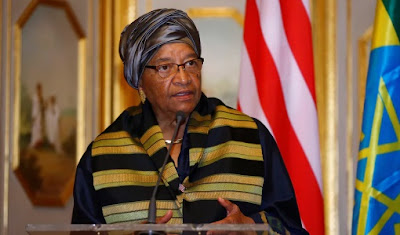 Charles Sirleaf, the son of Liberia's former President Ellen Johnson Sirleaf, has been arrested in relation to the illegal printing of more than $104m (£78m) worth of local banknotes.

He was a deputy governor of the Central Bank at the time of the incident in March last year. Mr Sirleaf's former boss - ex-Central Bank head Milton Weeks - has also been detained.

The arrests come after a report into the missing millions was released.

The much-anticipated report, carried out by investigative auditing firm Kroll associates, was released by the US embassy on Thursday.


It was looking into the alleged disappearance of more than $100m (£75m) worth of newly printed Liberian banknotes last year.

It had been widely reported that shipping containers full of banknotes had vanished from Monrovia's port and airport. However the report did not find any proof that this happened.

Instead, it found that Liberia's Central Bank had acted unilaterally and unlawfully by printing and importing into the country three times the amount of banknotes it had been authorised to do.
at March 02, 2019