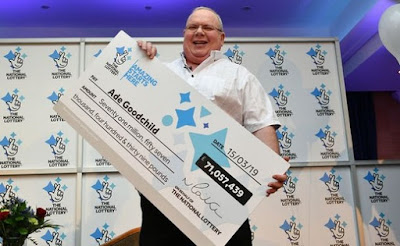 Britain's newest eligible bachelor has joked he will spend his £71million EuroMillions jackpot on wine and women and “waste the rest”.

Twice-divorced Ade Goodchild, 58, said he had no plans to settle down but warned potential gold diggers he is no soft touch.

The former metal factory worker said: “Anybody who I think I couldn’t have pulled before has got no chance, because I haven’t suddenly become more attractive overnight – just my wallet has.


Ade sounded like football legend George Best as he joked while quaffing champagne: “I’ll spend my money on wine and women – and waste the rest.”

But after two failed marriages he insisted “love would have to come find me”.
Cousin Michelle Lintern, 57, of Caerphilly, said the relatives would happily help only child Ade avoid gold diggers.

She said: “He’s a bit vulnerable with all that money but we are all very protective of him. We are all about the same age and very close.”

Ade’s first wife Catherine Berkeley said she wished him well and did not want a penny of his winnings.
The pair, who were married for 23 years, have stayed friends and she still walks his labradoodles Taz and Mutley.

He said: “I called to say I’d won £71million on the lottery but she didn’t believe me, she knows I’m a leg puller. We are still in touch, there’s no bitterness.”
But he declined to reveal whether his ex would get a cut of his winnings although close pals revealed it is more than likely he will share some of his fortune with her.

However Susannah’s parents, Malcolm and Lesley Smith, said she had told them: “I don’t want a penny of his winnings. He can keep the lot.”

She said: “Poor Susannah had been unhappy for years. She said he’d let himself go, become very self-centred. She put up with it for as long as she could but she’d had enough.

“He wouldn’t do anything around the house or garden, or even walk their two labradoodle dogs. Even after they split up, she had to go back to the house every day to walk them.”
He said: “We had slightly fancier beer, nice Italian beer, sent out for pizza and had some spicy wings – the sort of things millionaires do every Saturday.”

He now wants a new house with a jacuzzi, “a few staff” and dream holidays to places such as the Grand Canyon and the Pyramids.
Ade revealed that his first priority is to go looking at new houses with his parents.

He said: “Like all parents, they worry about my mortgage, bills and how long I will have to work for. I’ve told my parents they can stop saving now and spend my inheritance.”
Ade revealed that his first priority is to go looking at new houses with his parents.

He said: “Like all parents, they worry about my mortgage, bills and how long I will have to work for. I’ve told my parents they can stop saving now and spend my inheritance.”