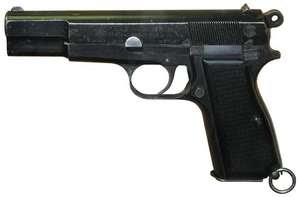 The Niger State Police Command has arrested a 35-year-old man, Mohammed Manu, for allegedly killing his wife, Bulo, in Barusa village, in the New Bussa Local Government Area of the state.

The command confirmed the arrest on Thursday, stating that a team of policemen attached to the New Bussa Police Division apprehended the suspect.

Manu, a father of five, was alleged to have killed Bulo for allegedly refusing him s-x after several moves.

It was learnt that Bulo’s refusal to sleep with her husband resulted in her untimely death.


Punch Metro gathered that the suspect had previously warned his wife of the dangers of starving him of sex almost on a daily basis.

The suspect told our correspondent that he shot his wife with a pistol after she provoked him by constantly denying him s-x.

Manu said, “I had warned my wife to stop denying me sex, which is the fundamental of any marriage; each time I demanded s-x from her, she treated me like a leper, which I considered unacceptable.

“When I pressed further that day, she pushed me and I lost my temper and killed her. She was fond of giving excuses each time I wanted to make love to her.

“How can my wife refuse my s-x advances? It is an abomination where I come from; she did not have the right to do that.”