How I Almost Committed Suicide 8 Years Ago- Samuel Olatunji 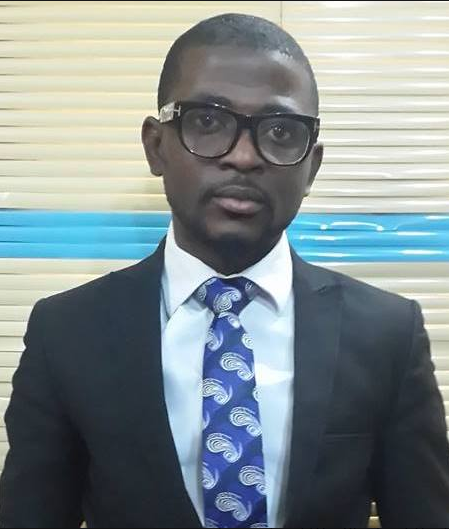 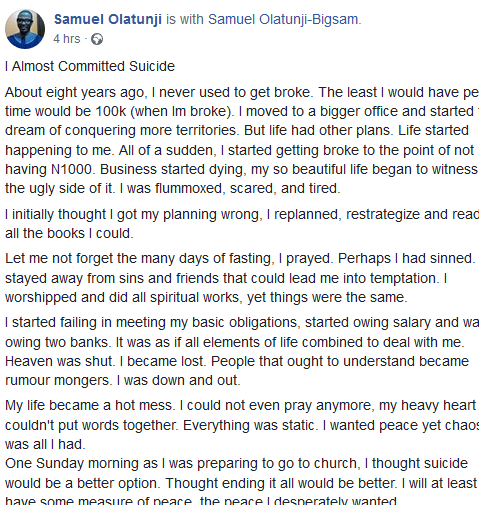 Samuel Olatunji,  a Public Relations specialist, popularly known has Big Sam has explained how he almost took his own life 8 years ago, when everything was down for him. According to Sam, he started a business, business didn't do well, he restrategized, still didn't work, got broke, couldn't pay salaries and it was like Heaven was closed against him. Today he is saying a different story and encouraging all to wait! There's a miracle by the corner.

About eight years ago, I never used to get broke. The least I would have per time would be 100k (when Im broke). I moved to a bigger office and started to dream of conquering more territories. But life had other plans. Life started happening to me. All of a sudden, I started getting broke to the point of not having N1000. Business started dying, my so beautiful life began to witness the ugly side of it. I was flummoxed, scared, and tired.


I initially thought I got my planning wrong, I replanned, restrategize and read all the books I could.

Let me not forget the many days of fasting, I prayed. Perhaps I had sinned. I stayed away from sins and friends that could lead me into temptation. I worshipped and did all spiritual works, yet things were the same.

I started failing in meeting my basic obligations, started owing salary and was owing two banks. It was as if all elements of life combined to deal with me. Heaven was shut. I became lost. People that ought to understand became rumour mongers. I was down and out.

My life became a hot mess. I could not even pray anymore, my heavy heart couldn't put words together. Everything was static. I wanted peace yet chaos was all I had.

One Sunday morning as I was preparing to go to church, I thought suicide would be a better option. Thought ending it all would be better. I will at least have some measure of peace, the peace I desperately wanted.

Somehow, I didn't follow through with the plan to kill myself. I made some major decisions and let God play his role as God. I left the office and worked day and night. God came through as usual. I have gone on to handle PR for major events and celebrities, manage special talents and two movies I executive produced (The Ghost and The Tout (co-owned) and Seven and a Half Dates were part of top 20 box office hits of 2018). If I had killed myself. Many dreams would have died. There would be no new chapter to write.

Please don't let life or the devil win. Keep working on your life. This is a phase of life, it will pass. Don't commit that suicide, give yourself a second chance. Like phoenix, you will rise from your ashes. Good morning. Bigsam''