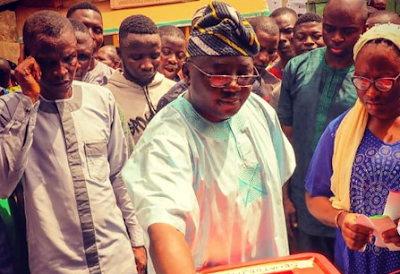 The gubernatorial candidate of the All Progressive Congress (APC) in the Saturday, March 9, 2019 election in Oyo State has expressed his deep appreciation to all leaders and members of the party who worked tirelessly for his electioneering campaign.

Adelabu expressed this while responding to an online news medium, SaharaReporters which alleged that he blamed the party's leadership for his failure.

According to a statement by his spokesperson, Dr. Bayo Busari, the allusion that he engaged a personal assistant to the governor of Oyo State, Dayo Iyaniwura in a fistcuff was far from the truth. "How can I fight with the governor's PA who was dedicated to my aspiration from beginning to the end and I knew everyone worked for me and the party during the campaigns?" Adelabu queried. "Dayo is my brother and I don't have issue with him nor with the leadership of the party," he reiterated.


He expressed his appreciation to Governor Abiola Ajimobi, the chairman of APC in Oyo State, Chief Akin Oke and the entire party leadership, saying without them he couldn't have recorded the feat he achieved in the election.

He also commended all the aspirants who stepped down for him during the party's primary and for standing by the party to ensure that the party remained united during the elections.