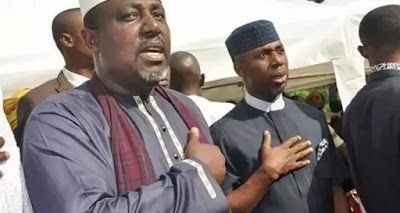 Governor Rochas Okorocha's son-in law and the governorship candidate of the Action Alliance (AA)  in the just concluded gubernatorial election in Imo state, Uche Nwosu, has said that the declaration of the People’s Democratic Party (PDP), Emeka Ihedioha, as the governor-elect, did not meet the constitutional requirement and therefore unacceptable.

He vowed to challenge the results of the election in the Court, stating that the declaration by the Returning Officer and Vice Chancellor of Micheal Okpara University of Agriculture Umudike was a clear violation of the provisions of the Constitution.

Nwosu alleged that he was robbed of victory by the INEC and vowed to reclaim his mandate.


He noted that the electoral body did not comply with the guidelines when it announced the PDP candidate as winner of the election.

He said that the declared winner didn’t meet the constitutional requirement of 25 percent spread in at least two-third of the number of Local Government areas of the state where the election was held.

According to him, “the law is clear on the requirements for declaring somebody as a winner in an election. The law required that to be declared a winner; you have the mandatory spread of 25 per cent win in at least two-thirds majority. In this case, two-thirds of the 27 local government areas of the state is 18 and Ihedioha has 25 per cent spread in only 12 local government areas whereas I have in15. So it’s clear that INEC has compromised.”