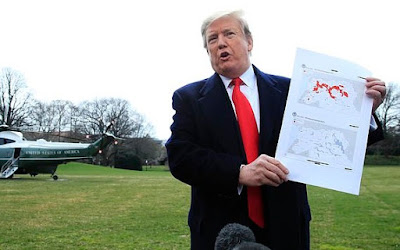 Donald Trump says the last of the Islamic State's territory in Syria will be freed by U.S.-backed forces 'by tonight.'

Trump spoke as he left the White House and displayed maps of IS-held territory in Iraq and Syria on the day he was elected and as of Wednesday morning.

The most recent map shows what Trump says is a 'tiny spot which will be gone by tonight.' He says when he was elected, Syria was 'a mess' and awash in IS fighters.

U.S.-backed fighters battling to retake the last IS outpost in eastern Syria seized most of the last pocket of land on Tuesday. Trump has previously announced the defeat of the group, but sleeper cells of fighters remain in Syria.

Trump says the U.S. will keep 400 troops in Syria indefinitely.