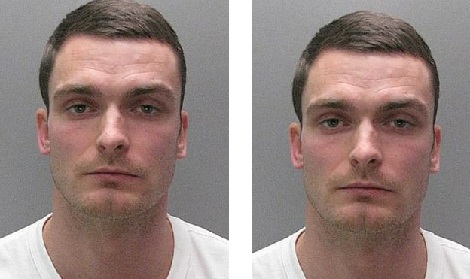 Adam Johnson's father has been spotted driving a blacked-out car from jail, as it is revealed that the ex-footballer will no longer be permitted to spend time alone with his daughter after his release from prison today.

Dave Johnson was seen in the black Mercedes van coming out of the prison in Doncaster just after midnight last night.

Johnson, 31, who was expected to be released from HMP Moorland overnight after serving just half of his six-year sentence, will be restricted to supervised visits with his four-year-old daughter Ayla.

Following his early release he is set to be closely watched by officials, despite not being issued with a criminal tag.

The black Mercedes was later seen arriving back at Johnson's property in Castle Eden, County Durham.

A social worker will monitor Johnson's every move while he is with his daughter and it is likely that he will live at a registered address.

The ex-Sunderland player was locked up in 2016 for grooming, kissing and touching a 15-year-old girl.

He was jailed at Bradford Crown Court in 2016 and the court heard that he deleted 800 messages
between him and his victim, who he is also banned from contacting.

Speaking to the Sun a source said: 'Johnson will be treated like any other convicted s-x offender. He's a free man, but it comes at a heavy price.'

Following his release he will also have to hand over his phone to officials without surrender and could be recalled to jail if he deletes anything without their knowledge.