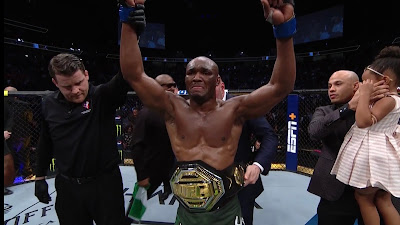 He won the mixed-martial arts (MMA) bout against American Tyron Woodley. The fighter, known as the "Nigerian Nightmare", dominated the Las Vegas contest for the welterweight title.

The UFC is the biggest competition in MMA, where competitors combine boxing, kickboxing, jiu-jitsu, wrestling and other disciplines while fighting in an octagonal cage.

Usman, 31, produced the performance of his career to dominate long-reigning welterweight champion Woodley. He extended his winning streak to 14 and maintained his unbeaten record in the UFC.