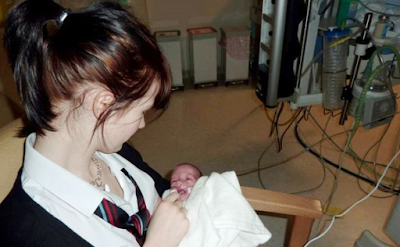 Rachel Smyth, from Glenburm, Scotland, was still at school when she gave birth to son, Kyle, now nine. But the courageous young mum has always stood on her own two feet and works as a health care assistant at Glasgow Children's Hospital.

Rachel has now been chosen as the winner of the Prince's Trust Rising Star Award. Here, she describes what it's like to become a mum age 14.

I found out I was having Kyle when I was three months pregnant .

His dad was my boyfriend at school and we were both really shocked.


We were always sensible and used protection - there was just one time when we didn't.

I constantly changed my mind about what I should do - and there were a lot of comments from friends and family.

It was one of the toughest decisions I have ever made.

But I always knew that if I got rid of my baby I would never forgive myself.

Initially a lot of people didn't believe I was pregnant, even some of my friends. They thought I was making it up for attention - some people even said they were going to batter me because of what had happened.

And some of my teachers didn't approve. I could see the odd glance and the stares. I knew they were disappointed in me.

I went into labour during the school holidays. It was a Wednesday morning and I was getting ready to go back to school and I remember I just didn't feel right.

My waters had broken and they had been leaking over a couple of days.

I finally realised I had gone into labour and was freaking out at my mum. She was telling me to stay calm.

I was so scared. I have never been through anything that scary.

We called Kyle's father and he came to the hospital.

I had to be rushed in for an emergency caesarean and the next thing I knew I wasn't pregnant any more.

It was so overwhelming but because I was two months early Kyle spent a few months in hospital and today I don't regret.

She was also chosen as the winner of the Prince's Trust Rising Star Award.