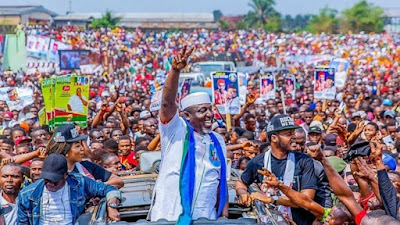 The Independent National Electoral Commission (INEC) has explained why it will not issue a certificate of return to any candidate in the February 23 Imo West senatorial election.

After a controversial results collation process, the outgoing governor of Imo, Rochas Okorocha, was declared winner of the Senate seat by the returning officer, Innocent Ibeabuchi, who clearly noted he did so “under duress”.

“…I have been held hostage here for days so I’m trying to ease off and take my life home back to my children and for the sake of that I am calling these results under duress,” Mr Ibeabuchi had said before reading out the results.

The commission said it will not recognise the governor as a senator-elect because of the controversy during the collation process.

“Declaration made under duress”, was boldly written instead.

“The commission has decided that we will not reward bad behavior in the electoral process and we recorded bad behavior in result collations in Imo West Senatorial District”, Mr Okoye told Millicent Nnwoka, the anchor of the programme.

“Investigation by the commission revealed that the returning officer for Imo West made a return under suspicious circumstances.

“He was put under too much pressure. He was forced to make a declaration and a return and we made determination that that particular return was not made out of the free will of the returning officer.”

Mr Okoye explained that in such circumstance where a valid return has not been made, “we are not going to bend the arm of the INEC to (accept) such a return.”

“So therefore, we decided not to issue certificate of return to any candidate of the Imo West senatorial elections until the commission takes a more critical look and take a decision on where to go from here,” the official noted.