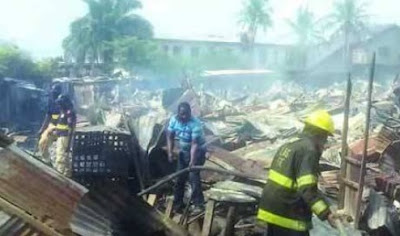 An explosion rocked Orile-Agege area of Lagos yesterday, leaving two persons injured, while buildings and shops, including property worth several millions of naira, were destroyed.

Residents said that tragedy occurred after a high tension wire snapped and landed on one of the buildings in which was a cooking gas.

The explosion was followed by balls of fire which jolted residents, some of who were still asleep.
Some residents sustained varying degrees of injuries in their bid to escape being caught up in the raging fire which spread to other rooms.

Residents who were rendered homeless by the inferno appealed to the state government to come to their aid by providing alternative accommodation for them,.pending when they would get money to rent accommodation.


One of them, Saidu Mohammed, lamented that he lost everything he had laboured for since he started working eight years ago. He said: “I could not salvage anything from the fire. The most painful aspect is that the money I was supposed to pay into the bank yesterday (Monday), on behalf of my company, got burnt. “I could not pay because the bank had closed. My intention was to pay it in today(yesterday), only for the unthinkable to happen.”

One of the shop owners, Mrs Mulikat Shuaib, like others, said the effort to salvage some of her wares proved abortive. She said: “I borrowed money from a friend to stockpile my shop. Unfortunately, everything is gone.

Two persons, a woman and a boy, who was severely injured, were rushed to the hospital.”