Man Arrested For Attempting To Make Love With His Cat 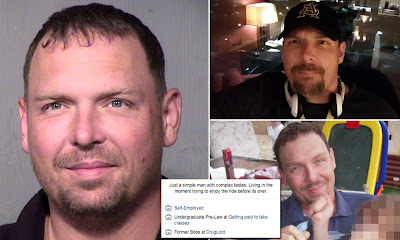 A man in Arizona has been arrested for allegedly having s-x in the shower with his pet cat. The Mesa Police Department responded to a call of a cat in distress at a residence located close to Val Vista Drive and University Drive on Wednesday.

There, a witness told authorities that 40-year-old Michael Navage, who is homeless, had taken his pet cat into the bathroom.

The caller heard the cat screaming and could hear Navage shouting that 'the cat was stuck on his penis'.


The caller told police that they also repeatedly heard the man call the cat a 'w***e,' according to police reports obtained by DailyMail.com.

A responding officer found the father in the bathroom naked with the cat partially wrapped in a towel near his genitals. Meth was also found inside the bathroom.

Navage was indicated as being a methamphetamine dealer who uses his drugs sales to secure lodging and showers at various places.

He is said to have had fake money and forged IDs and checks in his possession, according to police reports.

The cat was taken to a local veterinarian, who determined that the cat had suffered wounds on its backside. The abused critter was also found to have previous rib fractures and pelvic injuries that had healed over time.

Navage told police that he had not had s-x with the cat, adding that he had loved the pet since he got it as a kitten.

He repeatedly boasted to authorities that the 'girth' of his genitalia was too big to fit into the cat's anus, which meant that it was 'impossible' for him to have s-x with the cat.

The man - who lists himself as being a Drug Lord on his second Facebook profile - has been charged with drug possession, bestiality and animal cruelty.