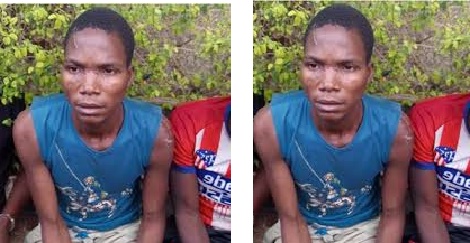 The police have arrested a man for allegedly raping and killing a pregnant woman in Gangnim Village of Langtang South Local Government Area in Plateau State.

The police said Timrimg Napkur attacked the woman, Zainab Abu, who was seven months pregnant, at the bank of a river she went with her two daughters to wash clothes.

The state commissioner of police, Isaac Akinmoyede, disclosed this to journalists on Wednesday at a press briefing held at the headquarters of the command.

According to Mr Akinmoyede, the suspect r-ped the victim and pushed her into the river to drown and she eventually died.


“At about 0800hrs, of 28/2/2019, Timring Napkur ‘m’ of Gangnim Village Langtang South Local Government attacked a 7- month old pregnant woman Zainab Abu at a riverside where she went to wash her clothes along with her two daughters.

“The suspect raped the victim, strangulated and pushed her into the river where she got drowned and died.

“The victim’s two daughters, Aije 7-year old and Khadija 4-year old, escaped and reported the crime to their father. The suspect has been arrested and he is undergoing investigation, ” the police commissioner said.

The suspect in his response to the allegation said he attempted to rape the woman but that he regretted his action.