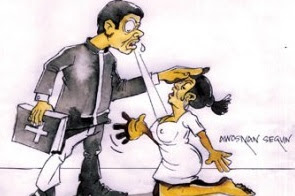 A 42-year-old suspected leader of a syndicate that specialised in defrauding unsuspecting persons has revealed that he posed as a prophet to swindle his victims, who are mostly miracle seekers.

The suspect, Osuji Chibuzor, also confessed to give fake prophesies to his victims and thereafter, asked them to get money for some spiritual cleansing.

The gang, whose office is located at 8, Afolabi Street, Iju Shaga and 7, Salami Street, Oko Oba, Agege, was arrested by operatives of the Rapid Response Squad, after his gang allegedly defrauded a woman of N165.000.

Explaining how she was swindled, the 34-year-old woman (names withheld) said: “I boarded a private taxi in Ojota to Ojodu Berger. On reaching Oregun, the driver picked another passenger.


“They started by saying I had some spiritual problems. Before I knew it, I ended up at their Iju office, where they collected all the money on me and the one in my bank account.

“They made me swear to an oath never to inform anyone. Thereafter, Osuji requested that I bring another N60,000 to complete the ritual.

“After collecting N165,000, they still would not let me rest. I borrowed N60,000 being the balance of what they needed. I was on the way to hand it over to them when I regained my senses.

“Luckily for me, with the assistance of a patrol team of RRS men, I was able to lure him out and got him arrested.” During interrogation, Chibuzor disclosed that his role was to give negative prophesy, particularly of death to victim, who out of fear would seek for solution, while other members of the gang had their respective roles.