Man To Die By Hanging For Robbery, Attacking Mom 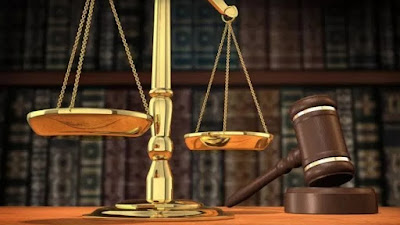 Justice Oluwatoyin Ipaye of a Lagos State High Court sitting in Igbosere, on Monday sentenced a man, Akeem Lawal, to death by hanging for attacking his 90-year-old mother, Taibat, with a machete.

Delivering judgment, Justice Ipaye also found the defendant guilty of attacking his step sister, Sherifat Olanipekun with a matchet and a gun.

Lawal was arraigned on May 3, 2016, on two counts amended charge of conspiracy to robbery and armed robbery, preferred against him by the Lagos State Government.

Justice Ipaye in his judgment said, “I find you guilty on both counts.


“You shall be hanged by the neck until you die.

“May the Lord have mercy on your soul”.

While reading her judgment, the judge held that the prosecution was able to prove that the alleged robbery and armed robbery actually happened.

He added that the convict was one of the armed robbers who attacked the victims.

The judge said she had no reason to doubt the testimonies of the victims because they were eye witnesses to the incident and had a close opportunity to see the robbers.

After sentencing, the convict’s counsel, Mrs E. B. Obiogwu, prayed the court to temper justice with mercy, adding that the convict had a son who depended on him.

She also added that the convict “if given another chance, won’t toe the line of crime again”.

George said that Lawal, along two others who were masked, broke down the front door of his step sister’s room with an axe and robbed her.

He said that the defendant also shot the step sister in the back, severed his aged-mother and left them to die.

When trial commenced on May 3, 2016, and the prosecution called three witnesses, who gave evidence before the court.

Olanipekun, in her testimony said that on the day of the incident she was working on some decorations for her church when she heard a loud sound.

She said the sound woke her son Abiodun Olanipekun, adding that she went to block the door to prevent the armed robbers from entering the house, but they broke down the door with an axe.

She also stated that immediately the three masked men entered the house, they demanded for N8million, supposedly received from a sold property.

Olanipekun said she told the robbers that there was no such money with her which infuriated one of the armed robbers, Lawal, to remove his mask.

Olanipekun said “Lawal ordered me to lay face down, he matcheted my head with the axe, shot me at the back.

“He went to the room and tried to strangle my aged mother”.

She also told the court that the robbers stole her laptop, phones and jewelry.

The defence counsel, denied that his client committed the offence.

He said that he was not in Lagos when the incident happened but was informed by one of his tenants.
at March 18, 2019