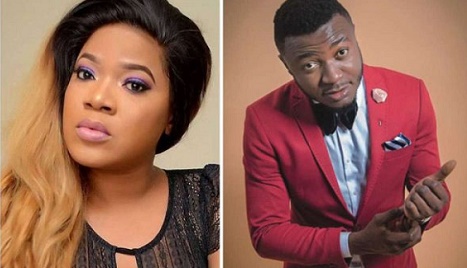 Mc Galaxy started a challenge where he allegedly asked fans to show their talents and win N50k. Many however say, the singer asked ladies to dance n*ked if they want to participate in the competition. It was a live session on instagram, a girl called in n*ked, danced and it was said Mc Galaxy declared her the winner and many girls were even ready to do same soon as she was announced the winner.

But many Nigerian women have called him out on this, saying the competition is nothing but one targeted at destroying women and what they represent. Among those that stood up to Galaxy is Nollywood actress, Toyin Abraham who wrote him an epistle! Read…

What you did asking girls to go naked for 50k is despicable, debasing, and bad in every way. You just further strengthen the believe that the easiest way women can get things is to sell their bodies. I sincerely can't fathom what you need or gain from this despicable act when you could have checked in on porn sites. I am not trying to be a moral judge, I am the least qualified to judge a fellow human, but just the way you used your influence and platform for this woman-debasing act, I am also using mine to stand against an act ridiculing women and further prove that some men are scum. See what people like  KemiAdetiba, Chimamanda and other women are doing with their platforms, they lift other women by living, giving and not asking for nudes. You can as well follow examples of young men like Davido, TundeEdnut, Wizkid and Banky W. My message to those girls that went naked on your page is this-please let's do better, let's stop making men like Mr. Galaxy think everything about women is money. Don't sell yourself short because of 50k, its the least of the money you will make in your lifetime. We are women, we are powerful, we are not cheap. With love always, Toyin Abraham.