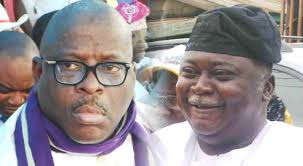 Oh dear! There’s more trouble for Buruji Kashamu now as even his own party members – the real big wings don’t want him to attain the State’s first seat.

Oladipo Adebutu and Kashamu have both been fighting for who would represent PDP at the governorship polls come Saturday and twice, the court of law declared Kashamu the right candidate. Now Adebutu, who is ofcus a big wing in PDP has openly declared his support for APM’s Adekunle Akinlade, who is Amosun’s candidate. Only yesterday too, another top big wing in PDP in the state, Gbenga Daniel declared support for APC’s Dapo Abiodun.

Why is this so? Will PDP suspend them for anti-party activists? Why is there so much political trouble in both Ogun APC and PDP, both leading parties in the state? Well, it’s getting clearer Kashamu might be going nowhere.