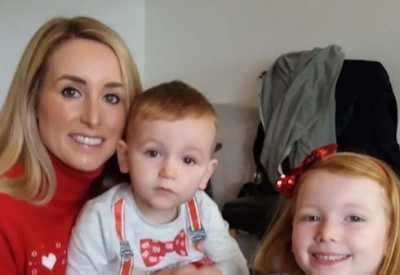 A mum-of-two with an aggressive form of breast cancer has died at the age of 35 with her family by her side.

Laura Hodgson, from Billingham, Teesside, was diagnosed with triple negative breast cancer in August last year and told there was little treatment available.

She was given a course of chemotherapy and tried everything to improve her health, from overhauling her diet to CBD oil and weekly Pilates.

In November, scans showed the tumours had shrunk and she was able to enjoy Christmas with her husband Stephen and their two children, aged three and five.


But she began to feel unwell in February and having picked up a cold, she started to become breathless and struggled to walk up an incline.

During an appointment with her consultant she was delivered a further blow when they discovered the chemo had stopped working.

Laura, who was described as an "absolute warrior", was put forward for a trial and was hoping to raise £100,000 for specialist therapy.

But tragically the brave mum lost her fight with the disease on Sunday night, her family confirmed on her GoFundMe page.

Writing on the fundraising site, her sister Michaela said: "It is with a heavy heart I am writing this.

"I would like to thank every person that donated, shared and supported our fight to support Laura.

"An angel grew it’s wings Sunday night after Laura had an infection which her body could not recover from. Laura died peacefully with her family by her side."

She said that the family would like to donate the money raised to the chemotherapy day unit at the University Hospital of North Tees and The Willow Trust.