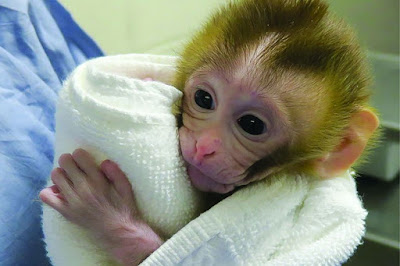 A monkey has been born after scientists successfully froze and thawed testicular tissue using a technique which could offer hope to young cancer patients.

Experts said the study, published in journal Science, was a "major step" towards developing fertility-restoring treatments for boys who undergo potentially sterilising procedures.

Treatments like chemotherapy can lead to infertility and, while it is possible for men to freeze their sperm ahead of treatment, pre-pubescent males are too young to produce it.

The scientists, from the University of Pittsburgh School of Medicine, removed a testis from five young rhesus macaques and froze the testicular tissue.


The animals then underwent chemotherapy.

As the animals approached puberty, the researchers thawed the tissue samples and implanted them back in the animals, along with fresh tissue from the remaining testis.

The team found that after a few months, the tissue had produced sperm, which was used to generate embryos and transferred to females.

Grady, a healthy female rhesus macaque, was born in April 2018.

Dr Adetunji Fayomi, one of the study's authors, said: "With Grady's birth, we were able to show proof-of-principle that we can cryopreserve pre-pubertal testicular tissue, and later use it to restore fertility as an adult."

Dr Kyle Orwig, the study's senior author, added: "This advance is an important step toward offering young cancer patients around the world a chance at having a family in the future."