Nigerian Uncle Attempts To Murder Niece After Impregnating Her Twice 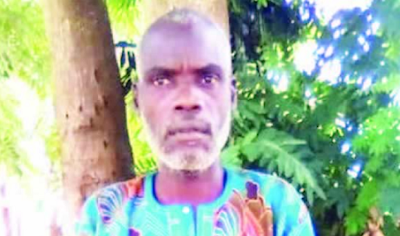 The Ekiti State Command of the Nigeria Security and Civil Defence Corps has arrested a 52-year-old man, Dennis Kiyeve, for turning his niece, a minor, into a s-x machine for over three years.

Kiyeve, who was said to have deflowered and impregnated the girl, was alleged to have conspired to kill her in order to cover his track.

The NSCDC State Commandant, Mr Solomon Iyamu, said in Ado Ekiti, on Thursday, that the suspect would be charged to court “to serve as a deterrent to other useless uncles, who are in the act of molesting their family members, and other adults, who molest minors.”


Trouble reportedly began for the girl in 2013 when she had to live with her uncle at Ilupeju village in the Gbonyin Ekiti Local Government Area of the state following her mother’s death in Benue State.

It was alleged that by 2016, when she turned 12, Kiyeve had started having canal knowledge of her.

The girl, who is now 15-year-old, said she could not refuse the s-xual advances of her uncle, who feeds and shelters her, adding, “Any attempt to refuse may result in hunger, punishment and deprivation of school fees.”

The minor, who reportedly aborted her first pregnancy in 2016, and is allegedly pregnant for her uncle again, said, “Medical examination had shown that fibroid tumour is growing along with the baby and is capable of hindering the development of the foetus.”

Consequently, she has appealed to non-governmental organisations and residents of Ekiti State to come to her rescue.

Kiyeve admitted that he had been having canal knowledge of the girl for three years, adding that the act had become normal for the two of them.

“When the act resulted in pregnancy in 2016, it was kept secret with the help of a quack midwife, who assisted us to terminate the pregnancy. The responsibility for the pregnancy was between me and one Kunle, who happened to be her schoolmate in the village,” he said,

According to him, when she got pregnant again, he became ashamed and attempted to terminate the pregnancy in a nearby bush around the village, but the girl was rescued by a good Samaritan, who reported the incident to the village head.

The village head, Chief Adebisi Olaoye, who promised to support the NSCDC in its investigation to unravel the mystery, said the villagers arrested the suspect while allegedly attempting to kill the girl.

Olaoye said the suspect’s movements had become suspicious after the affair blew open to the villagers, hence the residents had been keeping a close watch on him.
at March 01, 2019