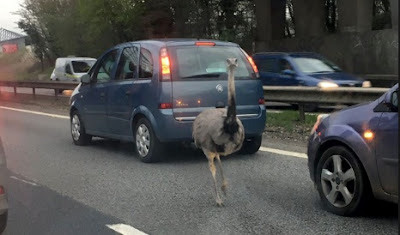 The brown and grey bird was spotted yesterday evening running between moving cars along the A12 in Colchester, Essex.

Drivers slowed down and changed lanes to avoid hitting the flightless bird.

Two persons later attempted to herd the animal away from the cars to the grassy verge of the road.


The bird has been on the carriageway near Colchester United's stadium and there are reports of five mile queues reaching back towards Ipswich.

He was returned to owner Debbie Johnson, who confirmed he had also left home to wander the roads last year.

Debbie, from Great Horkesley, said on Facebook: "Yes, it is Colin the same one as last year.