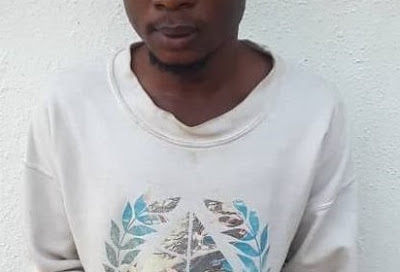 A 23-year-old polytechnic graduate, Lucky Abel, has been arrested by the personnel of the Edo State Command of the National Drug Law Enforcement Agency for alleged drug peddling.

The suspect, who hails from Benue State, was arrested at Okada in the Ovia North-East Local Government Area of the state.

Skunk is a hybrid sativa strain of marijuana that creates a skunk-like smell.


The Commander of the NDLEA in Edo State, Buba Wakawa, confirmed the suspect’s arrest.

He stated, “The arrest was based on information received on the illegal activities of the suspect in the state.

Wakawa urged the youth and members of the public to shun drug trafficking and fulfil their dreams and aspirations in life.

“Drug trafficking and abuse will cut short your enviable future. This suspect ought to be preparing to further his studies or engage in a meaningful work but that can only take place after he has been cleared of this criminal charge,” he added.

The suspect said in his statement that he had been smuggling drugs for the past one year.

Abel stated, “I have been selling drugs for the past one year. I attended Okada Grammar School, Okada, and graduated in 2010. Thereafter, I studied Business Administration at the Edo State Polytechnic, Usen, in 2013.

“After my diploma course, l wanted a job to sustain myself but there was none. That was how a friend introduced me to drug trafficking. In order to get more profit, l sell different types of drugs like cocaine, cannabis and rohypnol. I get my supply from New Road in the Ovia South-West Local Government Area of Edo State.”

The NDLEA commander, who said the suspect would be charged to court after investigation, warned drug dealers to quit the illegal business or be prepared for arrest and prosecution.