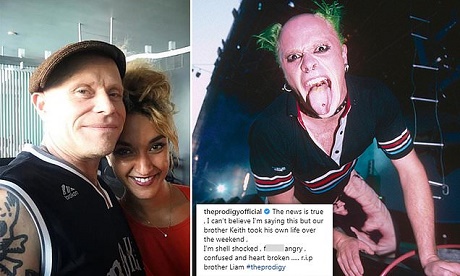 Keith Flint, the iconic frontman of the 1990s electronic band The Prodigy, has been found dead at his country home today after taking his own life aged 49, heartbroken bandmates have said.

The singer was discovered unconscious at the property near Dunmow, Essex at around 8am this morning, after police were called over what they described as 'concerns for his welfare'.

Paramedics attempted to resuscitate him but he was pronounced dead at the scene. Police are not treating the death as suspicious.


Bandmate Liam Haslett later wrote on the band's Instagram page: 'The news is true, I can't believe I'm saying this but our brother Keith took his own life over the weekend. I'm shell shocked , f***** angry, confused and heart broken..... r.i.p brother'

Flint became one of the faces of 1990s rave when his energetic dance style and punk haircuts made him one of the chart's most recognisable characters.  His band were best known for their fast-paced songs including Firestarter, Breathe and Smack My B**** Up.