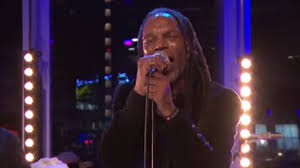 Ranking Roger, the co-founder of General Public and English Beat singer is dead. He died Tuesday after battling cancer.

English Beat announced Roger Charley's death telling fans he had "sadly passed away peacefully at home with his family by his side earlier today.
Roger's family would like to thank everyone for their constant support during this tough time. Roger was a fighter."

Roger reportedly suffered a stroke last summer and was diagnosed with two brain tumors and lung cancer -- but no cause of death has been released yet. He was 56. RIP