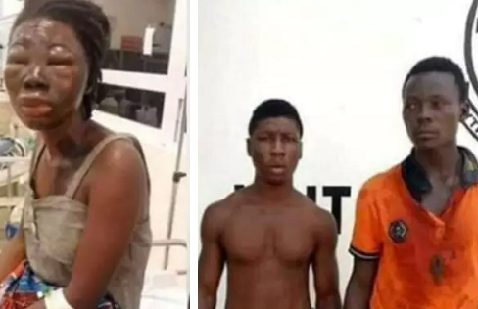 Two robbers have been nabbed after raping and pour acid on a female victim. The lady, one Adetutu – a student and recharge card seller was returning home when the two men above stopped her. They asked her to give them her bag, she refused and they chased her. Unfortunately, they met up with her, r-ped her, robbed her of her bag and then poured acid on her so that she won’t be able to identify them. Unfortunately for them, some people heard Adetutu’s cry and they were nabbed.

”The image seen here , (the victim is Adetutu. she’s a student but also sell recharge cards to meet up her school needs ,according to her, her mother doesn’t have enough money to pay,
However these two guys stopped her along the road,on her way home and ask for her bag, she refused to give them because her money and recharge cards were in it, and they tried to forced her, she ran away, but unfortunately for her there was no one to assist her, finally the guys got her, raped her, collected her bag, and poured acid on her so that she won’t be able to identify them, God being good they were caught while running away, they are now in police custody now. Doctor confirmed that Adetutu can’t see again because the acid has got into her eye balls, what a pity Adetutu lost her sight!!!