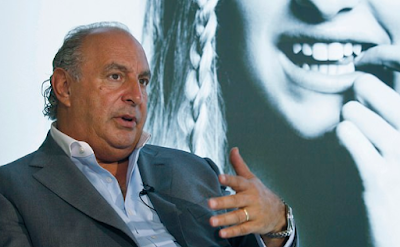 Sir Philip Green is preparing to shut as many as 200 stores over the next two years amid signs his Arcadia retail empire is beginning to crumble.

The Mail understands that leases on around 200 shops are coming up for review over the next two years which Green, 67, may not renew.

Arcadia employs 22,000 staff in 570 stores, with brands including Topshop, Burton, Dorothy Perkins, Evans, Miss Selfridge and Wallis, as well as hundreds of concessions.
The billionaire is planning to close its worst-performing outlets and slash rent costs.

On Thursday, it was revealed that a list of 67 of the more desirable stores is currently being offered to rival chains to take over the leases.


Included in the document, seen by the Financial Times, were branches of Topshop, Dorothy Perkins and Miss Selfridge.

Some of the at-risk stores were located in well-known shopping centres, such as the MetroCentre in Gateshead, Tyne and Wear, as well as on provincial high streets.

The plans are the latest sign that Green's empire is struggling to fight back against an onslaught from online-only firms such as Asos and Boohoo, which have become hugely popular with younger shoppers.

If the stores close, Arcadia will join a raft of retailers which are shutting shops.