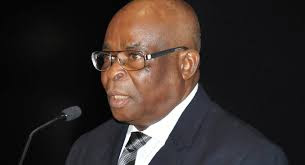 Justice Walter Onnoghen, suspended Chief Justice of Nigeria (CJN), on Tuesday failed to appear for proceedings before the Code of Conduct Tribunal, where he is charged with six counts over allegations of fraudulent declaration of assets.

Chief Adegboyega Awomolo (SAN), counsel to Onnoghen, who explained his absence to the three-man bench, said the suspended CJN developed toothache, which needed to be treated urgently.

He then went on to produce a medical report from the hospital the suspended CJN is reportedly receiving treatment.


Aliyu Umar (SAN), prosecuting counsel, who received a copy of the report, made “an observation”, noting that Onnoghen had high blood pressure.

According to Umar, Onnoghen’s doctor recommended bed rest for the suspended CJN.

In the light of the report, the tribunal adjourned the case until March 18, 2019.