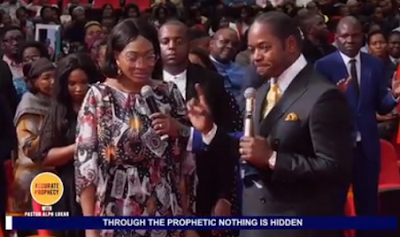 Nollywood actress, Oge Okoye has visited the church of Pastor Lukau who recently staged a FAKE RESURRECTION. The man whom the Pastor claimed he resurrected from death was later arrested and questioned by the police and he confessed that he never died. The Pastor also later apologised to the public. And now, your very own Oge, is seeking a miracle and alas! She went to find Pastor Lukau.

Nigerians have now started mocking her online shortly after the video was posted on the church’s social media page. Daddy Freeze is even starting a challenge for her, where he will be giving the winner of the challenge N100,000. Here’s what Freeze wrote;


Alph Luka finals gets a real actor as Oge Okoye visits him in the wake of Elliot’s resurrection. 🤣🤣🤣
-
The Oge OKOYE Challenge starts tomorrow from 10am!
-
Another 100k is up for grabs! 5 people, will each receive 20k for acting the best Oge Okoye and Alph Lukau scene.