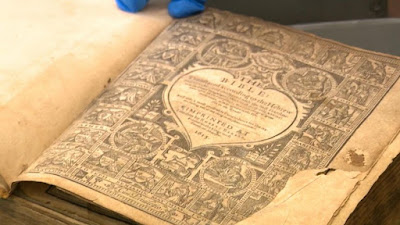 A 17th century Geneva Bible, one of the hundreds of rare books authorities said were stolen from a Pittsburgh library as part of a 20-year-long theft scheme, is back home.

The Bible, published in 1615, was traced to the American Pilgrim Museum in Leiden, about 70 kilometres from Amsterdam in the Netherlands, said FBI agent Robert Jones.

It was among more than 300 rare books, maps, plate books, atlases and more that were discovered missing from the Carnegie Library of Pittsburgh last year. A former archivist at the library and a rare book dealer are accused of stealing books valued at more than $8 million.

The Bible "is more than a piece of evidence," Jones said Thursday at a news conference in Pittsburgh. "I am happy to say it has finally made its way back to its rightful owner here in Pittsburgh."

"From a dollar-figure sense, it is not priceless," he said. "From a history perspective, it is priceless."

The Dutch museum had paid $1,200 US for the Bible, district attorney Stephen Zappala Jr. said.