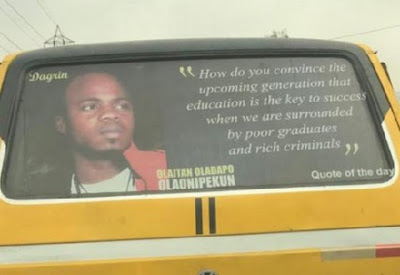 9 years after Dagrin lost his life in an accident caused by a truck which broke down right on the road with no indicating sign, Nigerians have continued to mourn their hero. Taking to social media, Nigerians have been sharing his photos with many saying, despite leaving the game 9 years ago, many mcees are still struggling to replace him... More of their tributes below...

''Far away ahead of the game that these emcees are still panting after your legacies to meet up in the race - even at death! Miss you lyrical monster! #dagrin@9 #dagrin

''About this time on 22_04_2010, #DAGRIN, wasn't aware death was Closing up on him. Just like yesterday.....its been Nine years since the Nigeria's #KingOfRap left this funky world. RIPDAGRIN

''9years ago, A legend came and turn on the light for all Yoruba Rappers but later passed away leaving them to enjoy the game of rap...I respect and Salute you Barack O'Grin! #Dagrin

''A legend left the world some years ago, don't forget, origin of rap, rest in peace,#dagrin