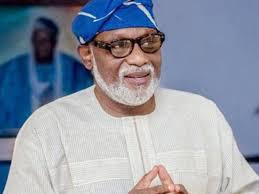 Rotimi Akeredolu, Governor of Ondo State, has been suspended from the All Progressives Congress (APC) by the national leadership of the party, multiple news outlets have reported.

It was learnt that Akeredolu was suspended by a party committee set up to look into his case.

On March 1, it was reported how the NWC of APC queried Akeredolu over his “glaring anti-party activities, which greatly affected the fortunes of their candidates in the recently-conducted presidential and national assembly elections in the state.