Ariana Grande Gets Hit With Lemon During Coachella 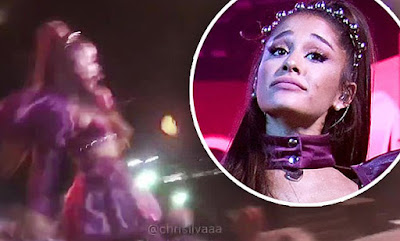 Four-time Grammy nominee Ariana Grande was pelted with a wedge of lemon during her headlining set at the Coachella Festival in Indio on Sunday night.

In a video captured by a fan, the 25-year-old pop diva got hit in the chest with the fruit while heading on the main stage to perform her song NASA in a wine-colored Michael Ngo outfit.

Stunned, the Thank U, Next songstress ran offstage and exclaimed: 'What the f***?That's because one of y'all threw a lemon at me! S***.'

Fans immediately suspected the culprit was a fan of Beyoncé due to her 2016 visual album Lemonade and a recent false report that Ariana was paid twice what Queen Bey was paid for her 2018 headlining set.


'We're told the contracts for Grande and Beyoncé were structured exactly the same way,' a source has since clarified to The Blast.

The former Nickelodeon child star recovered from the lemon assault and closed her concert with surprise guest Justin Bieber (they share manager Scooter Braun) to sing his 2016 hit Sorry.