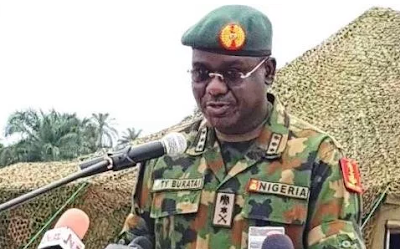 The Chief of Army Staff, Lt.-Gen. Tukur Buratai, says the Boko Haram terrorists are being contained with the recent renewed joint military offensive against them in Northern Borno and border areas.

Buratai said the offensive had pushed them to the remote Islands on the Lake Chad basin.

Represented by Maj.-Gen. Lamidi Adeosun, the Chief of Training and Operations, the chief of army staff disclosed this in an interview with newsmen at Monguno in Borno North after celebrating the Easter with troops.

He said the containment of the terrorists was made possible by joint operations by troops of the Lake Chad Basin countries, including the Multinational Joint Task Force – MNJTF.


“You will discover that the Boko Haram terrorists are now lurking around the borders, especially the dangerous and inaccessible areas of the Tumbun and Islands (of Lake Chad).’’

“And the best way to handle them is to have concentration of forces,’’ he said.