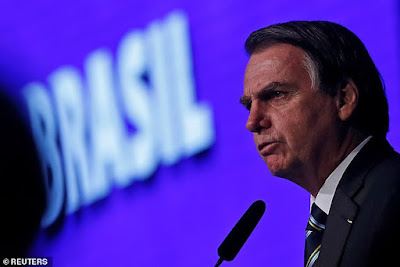 Brazil's President claims 1,000 men undergo pen!s amputations every year in the South American country due to a lack of basic hygiene.

Jair Bolsonaro, a former army captain, called the state of affairs 'ridiculous and sad' in a press conference in Brasilia after visiting the Education Ministry.

The Brazilian Urology Society confirmed the figure, adding some men are forced to have their genitals removed due to untreatable infections, as well as cancer and complications of HIV.

'In Brazil, we have 1,000 pen!s amputations a year due to a lack of water and soap,' Bolsonaro said.


'We have to find a way to get out of the bottom of this hole.'

Bolsonaro did not specify the source of the figure, however, it has been quoted in local news magazines as far back as 2017.

He added his government must start to work with vulnerable men to make them more aware of the dangers of poor hygiene.